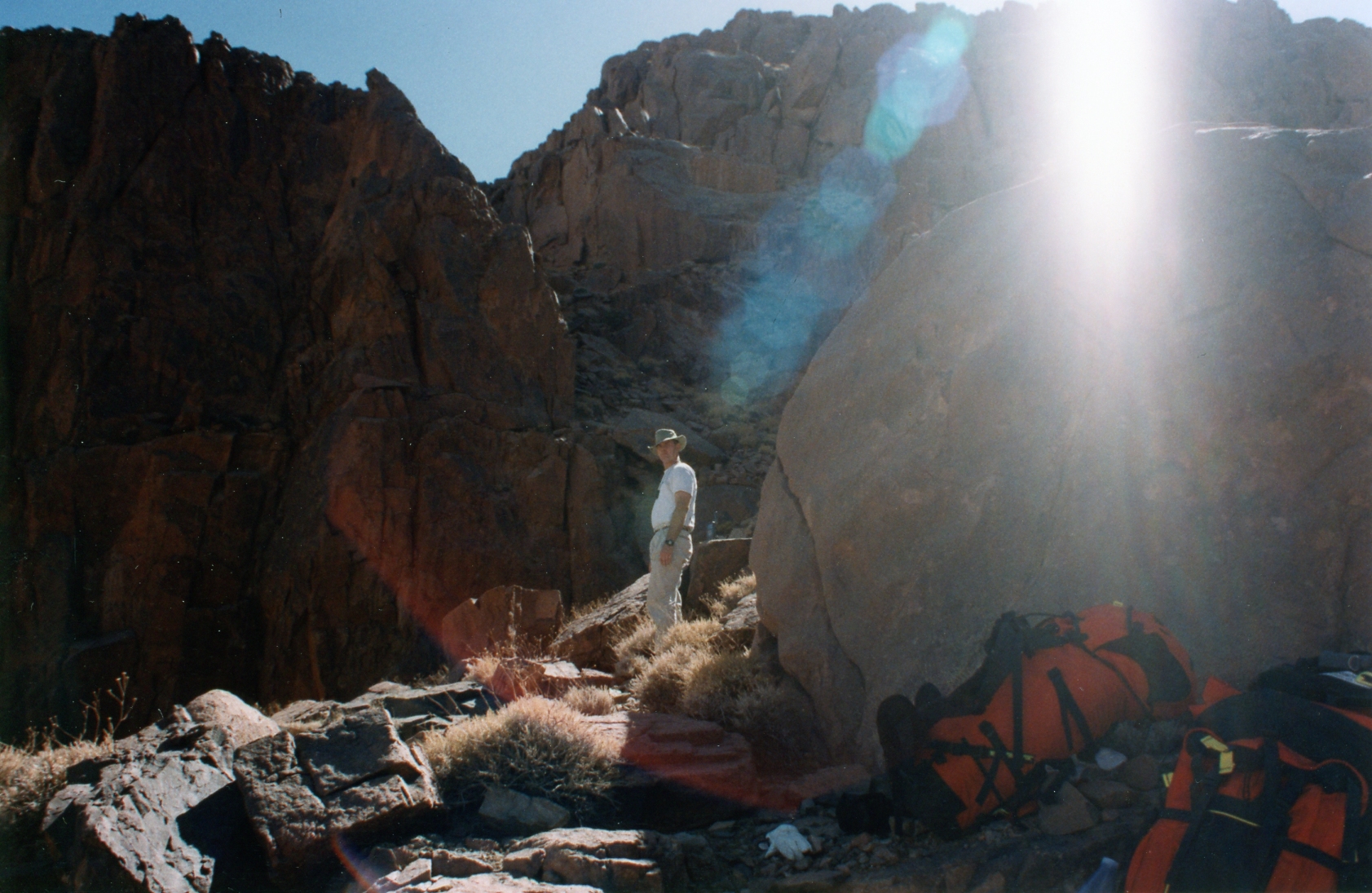 Jebel Al Lawz.  The towering, jagged highpoint of all the mountains of northwest Arabia.  I shared yesterday about Jebel Maqla, which in itself is not a walk in the park, per se.  But this one!  Jebel Lawz! Mt. Horeb of Biblical fame! WOW!  The high and inaccessible one!  Fraught with precipices that plunge thousands of feet sharply downward and no obvious single continuing pathway to the top, this mountain took us numerous excursions before we finally found a way up to the very peak, which we formally named The Hidden Passage.  I can’t even begin to describe how intense this climb really was.  Yet, all along the way we experienced some of the most glorious scenery and exhilarating moments we ever have had, or maybe ever will.  There is just something about this place that sets it apart.

Our friends who climbed Jebel Maqla recently also made an attempt to get to the top of Jebel Lawz.  We shared our experience with this high and lofty peak with them as we had also done with Jebel Maqla, and they prepared for their own adventure.  Below you will find their amazing journey.  Again, we thank them so much for sharing their encounter.  I have no doubt that these guys will soon accomplish their goal; the very pinnacle of this stunning mountain!

Earlier in 2020 a friend and I attempted to do a day hike of Jebel al Lawz in Saudi Arabia. I think we got within about 2.5-3.5 hours from the top.

Jim and Penny had given us a route map and we followed that as closely as possible. This hike is an absolutely beautiful hike. We passed running water, ponds, small palm groves, almond trees, fig trees and the beauty was amazing. A few weeks before we climbed, it had snowed on the mountain, this probably added to the water flow.

We left Tabuk early but it took us almost 4 hours to get to the place we parked our car. The dogs of the Bedouin community were very loud as we started our hike. We both had almost 5 liters of water and plenty of food. Our goal was to climb Lawz as a day climb.

The weather was perfect for us, cool at the start and cool at the end. Some ice on the ponds on the way up. Many places of beauty on the way.

Trail finding was not so easy, more on the way down we noticed that the camels had left a trail of dung and if you looked for that there was a smallish trail to be followed. But almost as easily lost again. We did not see any camels, but we were amazed at how high they were able to get. Another note is that we climbed up mainly in the wadi bottom, in a few places we could not stay in the wadi because of too many almond trees or the rock face was too high to climb so we would go around. On the way down we stayed more on the left side of the wadi, not on the bottom, and this seemed to make travel a little easier.

All of Jim and Penny’s hunting for so many years made it possible for us to just try it for the first time and get so close – I cannot believe Jim and Penny did this all without GPS and Google Earth***. Thank you so much for being a big part in all that we have been able to do and for your advice along the way.

I know Penny said that it would take more than one day to climb Lawz, but that is what we wanted to try. Now we need to rethink this as well and see about another time to try this again adding a day or two to the plan. We agree that to do this in one day is almost impossible. There is so much added time just trying to find a way to go up, no really great trails to follow adds tons of time.

This climb is a lot harder and more involved than climbing Jebel Maqla, you need to plan a lot more. Do I think it is possible as a day climb, YES, but you probably would have to camp at the place where you are going to start the night before the hike and start at 4 am with head lamps.

***When I noticed what Steve reported here, I had to laugh at ourselves!  For our Lawz climb, we actually had an old, archaic GPS.  It was a tank! Huge and heavy; it rarely worked.  It also took about 5 -10 minutes of sitting before it would even locate satellites!  It was maddening!  However, we finally got it to read once we got near the top of Lawz.  We didn’t have it before the Lawz climb, so prior to that, we didn’t have any GPS readings available.  But believe me, it was almost like not having one at all, because we didn’t have the coordinates (from Google earth) to begin with as it wasn’t available.  We merely had it with us not to use to find coordinates, but to mark where we had been.  Jim found the way up (the hidden passage) by visual alone, after multiple attempts.  It was crazy!  ?